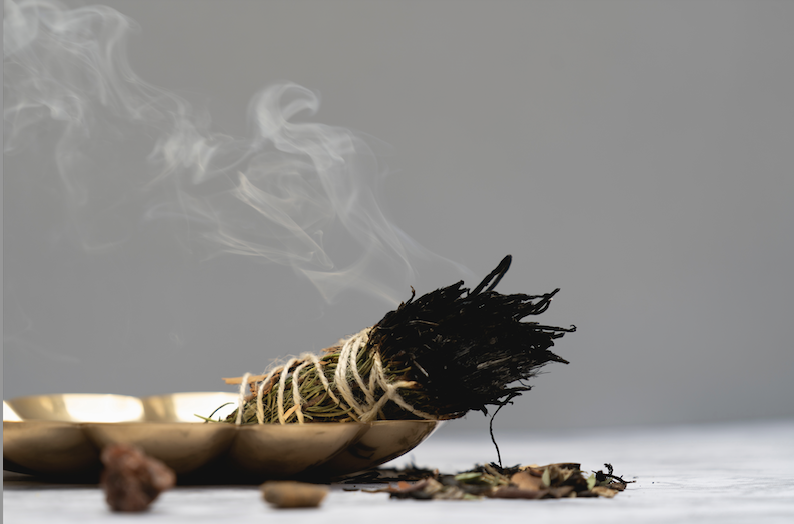 “Its just this space…oh, then there is this creepy murder basement, but we don’t use it. We store a few things down there, but that’s it.”

We connected with this young business owner at an open house in her shop. I may actually be a little awkward in that I waited patiently for other people to walk away from her before saying, “Hey, did you smudge this space before you opened?” and then proceeded to tell her about the excessive draining water energy in her space and my concerns for her business.

This location is fantastic, but no business ever survives in it. Each business that has been there lasts through their first lease, and then either moves, or most often, goes under. I immediately liked this woman the second I met her. Some people you just vibe with. I made the uncomfortable move to talk to her about the energy of her space because I sincerely really want her to succeed. After a short conversation, we made a date for Clarence and I to come back and clear her space.

Most older buildings have lots of energy from the past. As always, we started on the lower level, aka the murder basement. Down there, the space kept going further and further back, little room after little room until this larger room far in the back of the building. There used to be windows and doors at one point in history, and it is now block walls. Bars cover old windows, old broken wood trim, dilapidated flooring, twists and turns, broken bottles, old furnace boilers still spewing smoke and the sounds of water rushing under the floorboards while they rotted. There are things in that basement I don’t even care to identify. The one thingI could not help but identify was the sobbing sound of a woman, hidden deep in a corner near the bathroom. No, this wasn’t a physical human, it was a ghost. An earthbound stuck in her excessive grief of loss of what she termed to me as “Everything. I’ve lost everything”.

I began to pray for her, and then when she felt her Spirit start to lift, with her. I held her energy and let her know she was safe to go, that the Angels that came for her would lead her across and the joy she would experience I could not describe, but trusted. She felt she didn’t deserve it, she had not always been a “respectable woman”, but the Angel assured her she was more than deserving and they would carry her. She was sure she was going into the Light of love. Soon her Spirit lifted away. I prayed in gratitude to the Angels that so lovingly carried her over.
The water noises were minimized. The creepiness of the space shifted and we actually began to see the beauty of what was once there.

As we finished our work for the evening things became more fun and more festive. The entire place shifted before we were even done clearing it. The next day I received a text from our friend, the proprietor, “it just feels so much lighter in here!” Her excitement was clear.

The rest of the story of course remains to be lived out. With that said, we are confident of one thing: the Soul of an earthbound is now free. Sometimes what we are allowed to facilitate is not what we expected. In some ways this makes it even better.
Forever the journey, Anne